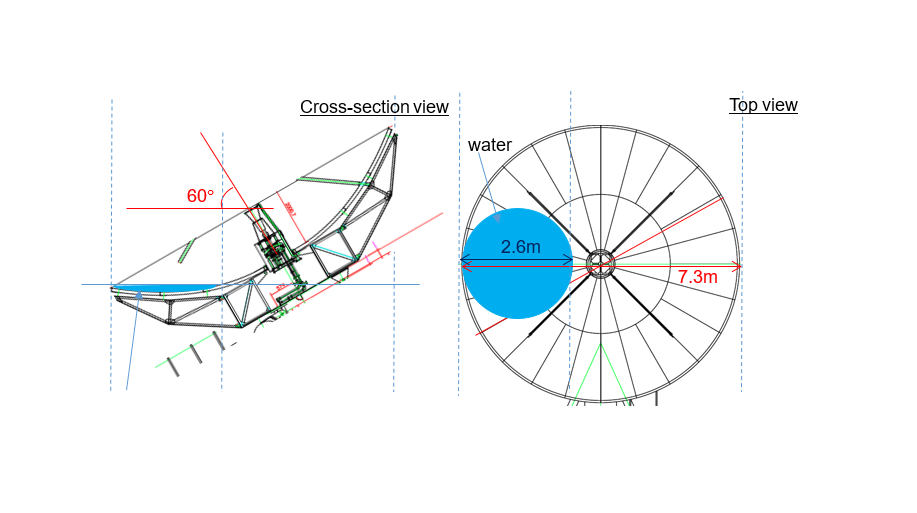 1) Replace new feed Teflon coated diaphragm regularly (yearly) to prevent rain water staying on the feed aperture. This is because the waterproof capability of old diaphragm can be degraded after long time operation.

2) Increase the rain blower wind speed as it may help reduce the accumulation of water in front of the feed aperture.

3) Increase the uplink power by 3dB in advance, an hour before heavy rain begins to compensate resulting decreased power.

In satellite transmission modelling, the path loss is the reduction in the power density of an electromagnetic (EM) wave as it propagates through space. The path loss includes free space loss which depends on frequency and distance, and propagation loss as a result of refraction, diffraction, reflection and absorption when the EM wave propagates through the medium between transmitter and receiver. International Telecommunication Union (ITU) provides a model to estimate the propagation loss between earth and space, and is generally used by network engineers to determine the rain margins in the corresponding link budget analysis for different geographical sites. However, AsiaSat has observed and received reports of higher than expected C-band uplink propagation loss during heavy rain (typically 50mm/h rainfall rate) from some uplink stations. By tracking the performance differences between the satellite telemetry and the rain attenuation prediction data, insight can be gathered for more detailed investigations. For example, it is observed that the uplink propagation loss is about 8 to 11dB through the telemetry for an uplink in Singapore during heavy rain, however the ITU rain model prediction can account for only part of the observed losses based on the reported rainfall rate from Meteorological Service Singapore.

Investigation shows the additional and unexpected loss is a combination of the antenna loss due to the water film formed on the surface of the feed aperture, and the water pool accumulated on the main reflector, resulting in wet antenna attenuation (WAA). Wet antenna attenuation is an additional contributor to the overall signal fading during rain events along the communication link path. We performed extensive tests to measure the losses under different water film thickness on the feed aperture. In addition, antenna gain degradation due to the water accumulated on the main reflector surface has been measured. Based on these measurement results, we are able to better understand the effect of the wet antenna attenuation from the propagation loss, and estimate the required transmitting power capability for uplink power control during heavy rain.

The coastal region of China and South East Asia are located within the  ITU wet zone. Heavy rain is expected especially in monsoon seasons. Based on the ITU rain model, the predicted rain loss depends on rainfall rate, antenna elevation, frequency and rain path length. The rain loss is about 4dB at 6GHz during severe rain when rainfall rate is greater than 120mm/h. The estimated rain loss of Singapore at 6GHz versus rainfall rate is shown in Figure 1. 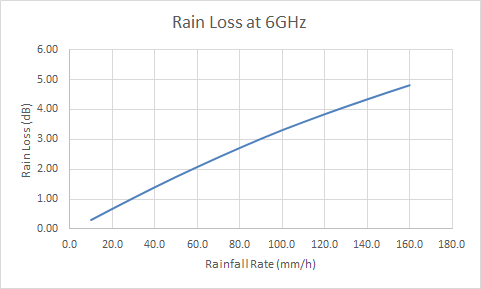 For some advanced satellites, as in AsiaSat’s fleet, uplink power data can be retrieved from satellite telemetry data which measures the input power to the high power amplifier (which is TWTA in AsiaSat's fleet). By trending the telemetry, we can determine the delta of incoming power between clear sky and adverse weather condition from the uplink station. Based on the trending of the collected data, the uplink rain attenuation was about 8 to 11dB in Singapore and Hong Kong during heavy rain condition at C-band. By cross correlating it with the ITU data, there is an unexpected additional loss of approximate 6dB.

We know that wet antenna attenuation can be up to 8dB for a 0.4mm water sheet formed on the feed aperture [1]. Wet antenna attenuation could be a function of frequency, antenna structure, material used for the antenna reflector and feed, and the rainfall rate on the antenna. It will affect the antenna efficiency, changes in directivity and variation in antenna feed port reflectivity. We conducted extensive testing to measure the signal level degradation on antennas with different water film thickness, and different strengths and structures of antenna wetting conditions on the feed aperture and main reflector: the three types are discussed below: 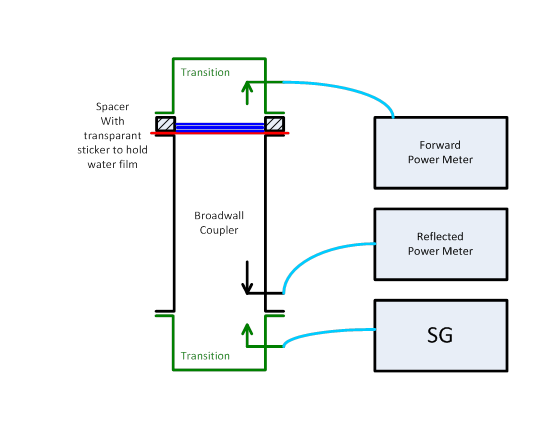 Figure 3. Signal degradation versus water film thickness on a feed aperture at 6GHz

The test setup on feed aperture is shown in Figure 4a.

The test setup on feed aperture is shown in Figure 4b.

The test setup on feed aperture is shown in Figure 4c.

The results are tabulated below 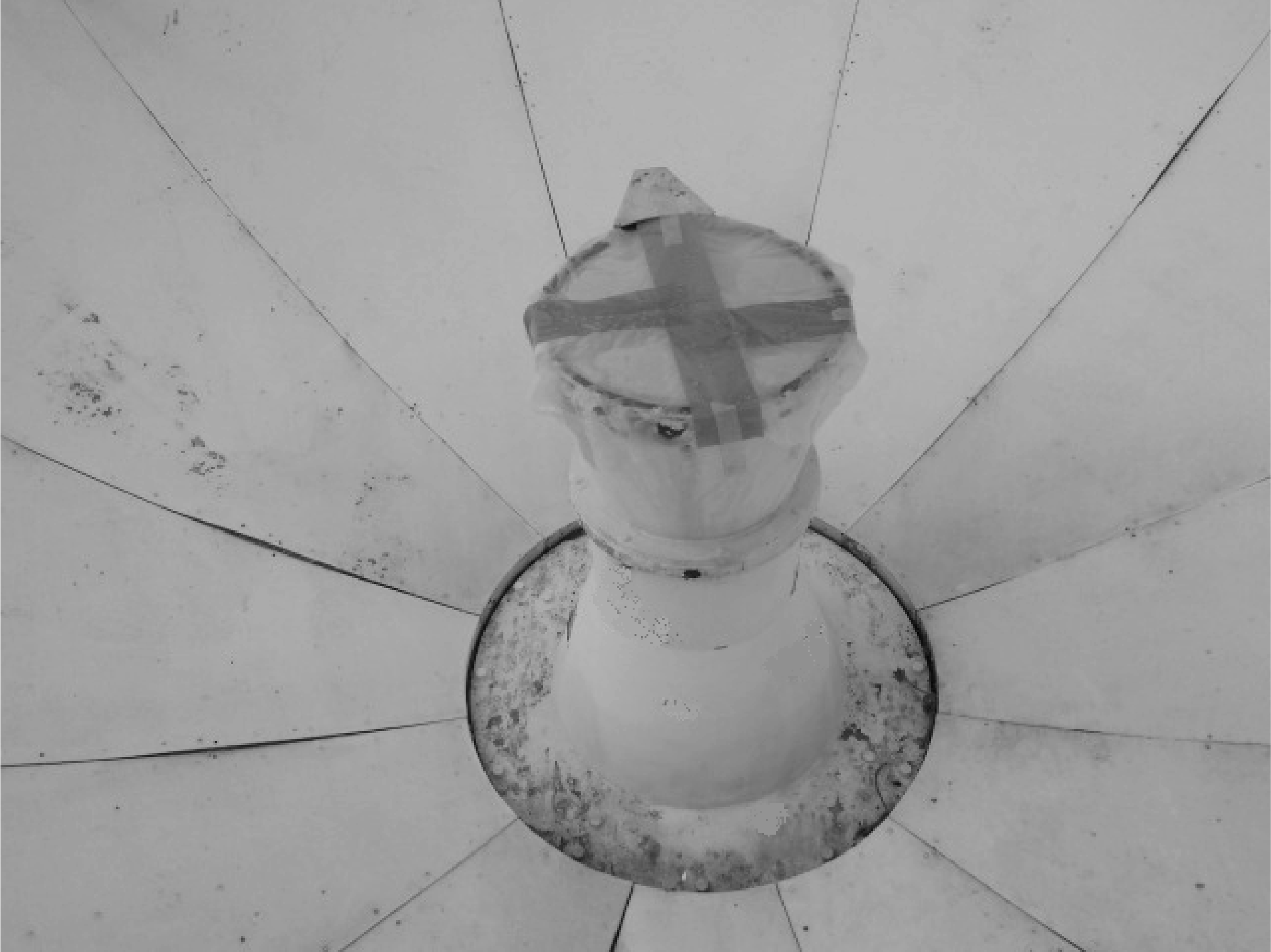 Figure 4a. A wet tissue on feed aperture 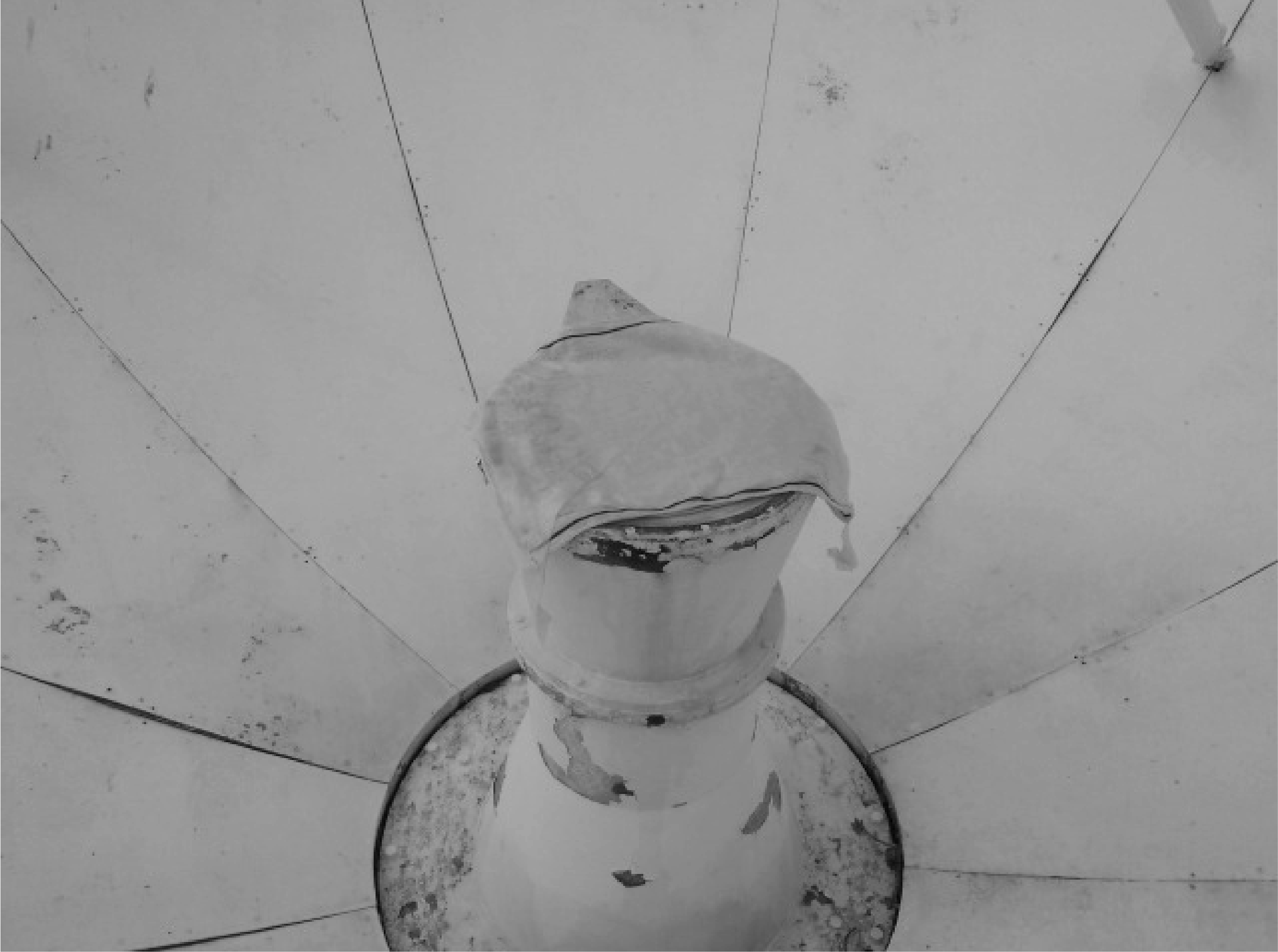 Figure 4b. A wet towel on feed aperture

Figure 4c. A bag of water on feed aperture

The antenna gain degrades if water accumulates on the main reflector. To investigate the corresponding loss, a test has been conducted with results in line with our prediction. The antenna elevation look angle toward AsiaSat 7 is about 60 degree in Hong Kong so the rain water may accumulate on the main reflector. For a 7.3m antenna, the maximum area of accumulated water on the main reflector surface is about 2.6m in diameter, which is about 13% of the surface area of the antenna. The water pool will affect the total energy toward the target satellite due to scattering, and as a result degrading the antenna efficiency. The estimated worst case gain degradation is about 0.6dB. The test case has the same test setup as outlined in (2). 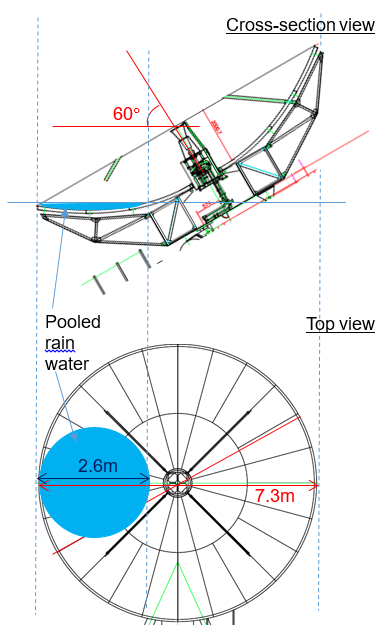 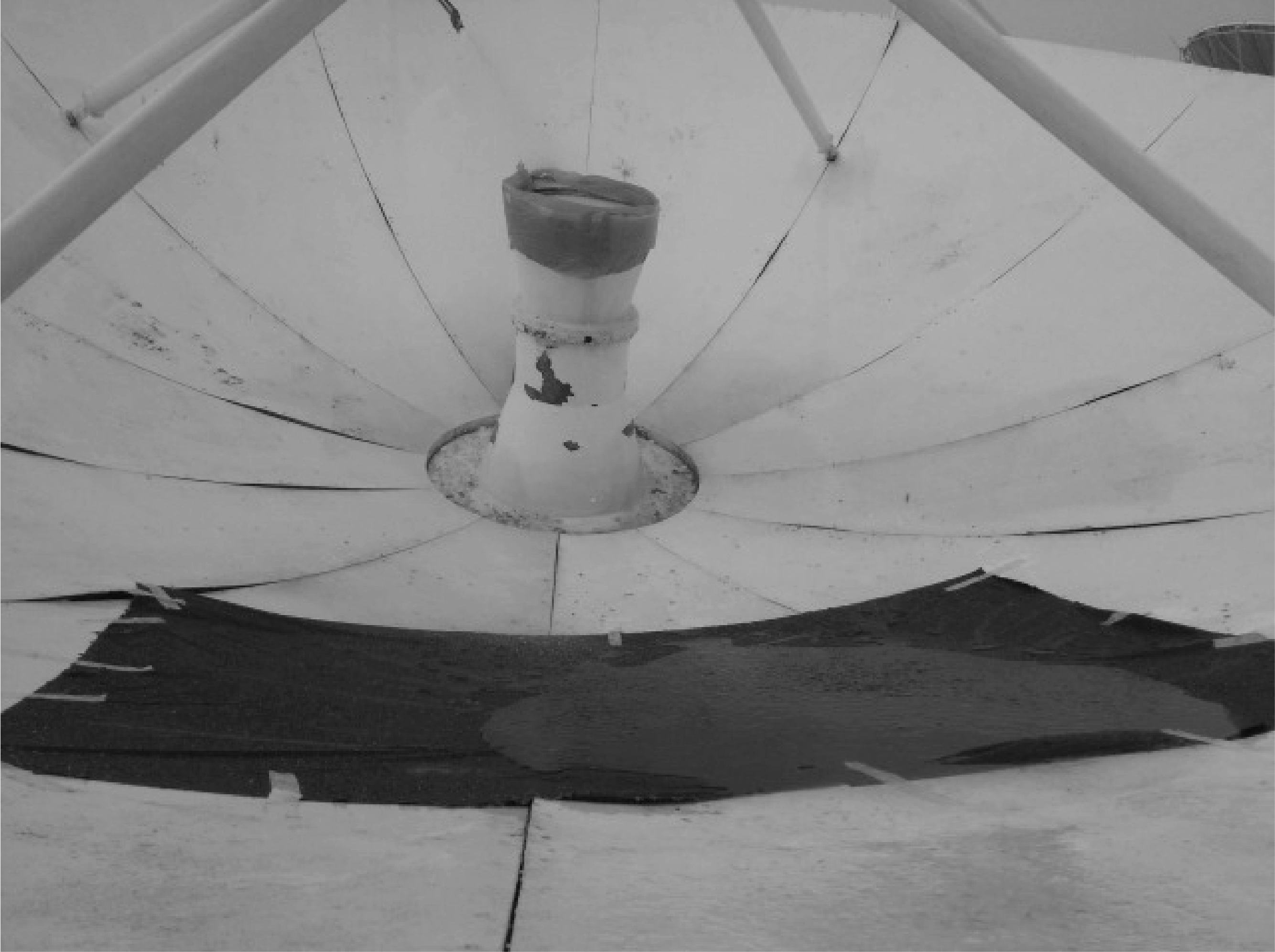 Water film and water pools formed on the feed aperture and on the main reflector due to rain can cause significant output power degradation. The water film on the feed aperture will distort the electric field distribution and cause severe reflected power back to the HPA which degrades the total output power, or may even trip the HPA if the reflected power is larger than the threshold trip point of the HPA. If the water film thickness is 0.2mm, it will cause 7dB degradation. If the water film thickness is greater than 0.3mm, it will cause more than 11dB degradation in output power. Besides, the water pool accumulated on the main reflector will affect the antenna efficiency and degrade the antenna gain. High elevation look angle of the antenna may accumulate even more water on the main reflector and cause more degradation in antenna gain. This explains the extremely high rain attenuation observed during heavy rain in Singapore, the propagation losses include rain loss and additional loss due to water film effect on feed aperture and main reflector. To mitigate the wet antenna attenuation, the following techniques are recommended: