HOW TO RECEIVE ASIASAT

To receive AsiaSat, you need to install a satellite TV system.
If you are living in a single house, all you need is a TVRO (Television Receive Only). The system includes:

A satellite dish is an antenna to receive the satellite signals that are reflected onto the feedhorns mounted to the dish. The TVRO dish size required for AsiaSat reception in general depends on the following:

The dish size for SMATV system depends on the satellite's signal strength at the reception location and the number of receivers connected to the system. A larger dish may be required in order to compensate for signal distribution losses.

The feedhorn is a device that collects the signals at the focus of the satellite dish and channels them to the LNB (Low Noise Block Down Converter). The LNB amplifies the received signals (3.6 - 4.2 GHz for C-band or 12.25 - 12.75 GHz for Ku-band) and converts them to lower frequency in the range between 950 and 2150 MHz, and are then sent down a cable to the satellite receiver.

A satellite receiver is a unit which takes signals from the LNB(s) and decodes the TV video and audio so they can appear on TV. Because both C-band and Ku-band LNBs normally have the same output frequency, which is from 950 - 2150 MHz, a receiver shall be capable of receiving either C-band or Ku-band programmes. An analogue receiver is needed for the reception of analogue channels whereas a digital receiver to receive digital channels. To watch television channels that are encrypted or conditional access, you need a special Integrated Receiver Decoder (IRD) which is normally supplied by the broadcasters or cable operators.

Since a domestic satellite receiver is designed for 1:1 reception, i.e. one input and one output, you need more receivers and use a n:1 AV selector to collect all signal inputs if your system has more than one incoming signal e.g. dual polarisation or dual band.

If you are living in a multi-storey dwelling, you need a SMATV (Satellite Master Antenna Television) system that allows the distribution of television programmes from the satellites to all households in the building. The system includes: 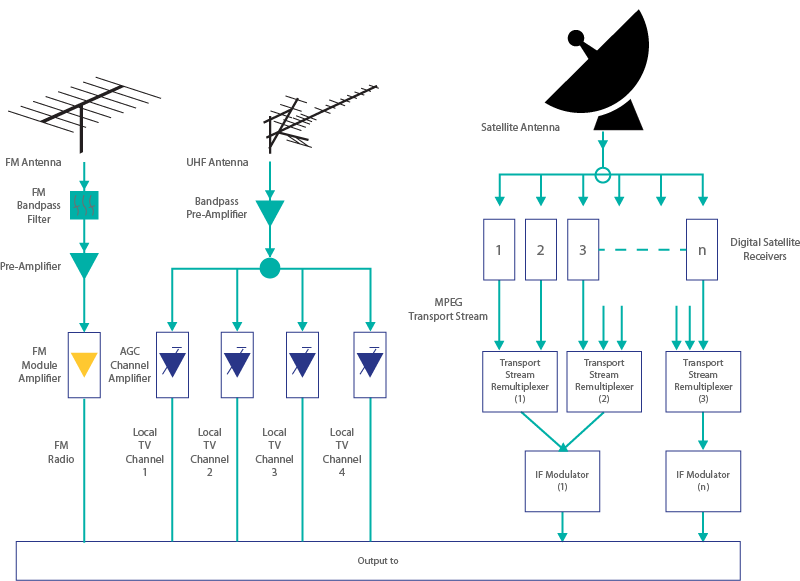 To set up the satellite TV system for reception, your local installer can advise you on the exact size of dish, the system set up and the licensing issues in your country.

Know more about Dual Satellite Reception and how you can benefit.